It appeared as an Advert "For Sale" June 1958 in the
Motor Sport Magazine at
"Lockharts of Dunstable", Bedfordshire

with the following write-up
﻿
1957 (AUGUST) TURNER 803 c.c. TWO SEATER﻿
Perhaps the prettiest car of this type to be built, this almost new Turner possesses rather remarkable road holding properties and almost "bubble-car" petrol consumption ..... well, say 50m.p.g. With an Austin engine, gearbox and other components, the spares position is good --- and the price is right --- £495

It appears to have no DVLA history listed, so has been unregistered with this number since the mid/late 1970's. 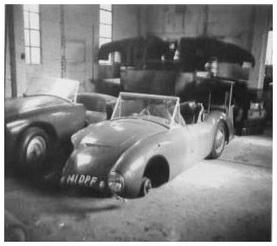 Well, I received an email this month from Russell Filby, of the Turner Sports Car website

Ivor,
141 DPF – What do you think? Ashley?
Turner Chassis underneath – There is a photo of it For Sale June 1958 Motor Sport Magazine.
(That's the same one as above)

The car shows a little bit of the drivers side wing damage and it's awaiting repairs at Pendeford Aerodrome in Wolverhampton where Turner car production continued until early 1966.

If you have any other information about this
Ashley 750-Turner 803 car
Registration No.
141 DPF