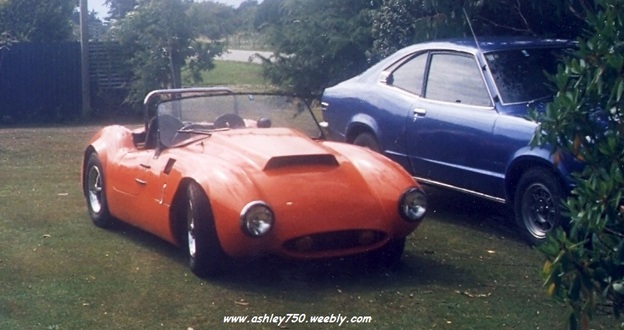 Ashley Cantwell Puma (Ashley 750 Body)
I only heard about this Cantwell Puma - Ashley 750 car at the end of June 2014.
I unexpectedly received an email from Judy, a previous owner from New Zealand, back in the late 1980's.


This car would have been an Ashley 750 bodyshell that was imported
into New Zealand and was part of a small production run
of six similar cars with hardtops,
produced by Cantwell Cars Ltd. Christchurch, New Zealand
owned by a local racing driver Frank Cantwell in the late 1950's. 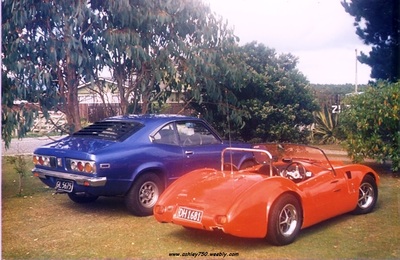 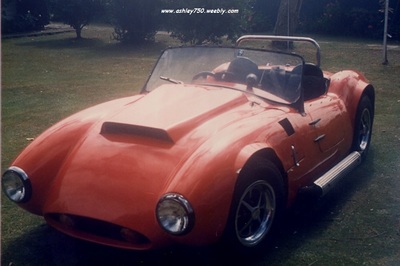 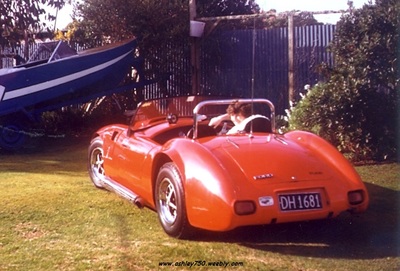 Judy's email to me gave me details and the above photo's:

Please find attached photographs from around 1986-1989 of my Puma.  I bought it from a car dealer in Nelson NZ.  It should never have had a warrant of fitness as it was in really bad shape which I discovered during the homeward drive from Nelson to Westport.
My friend Craig, is an excellent local mechanic and he did a full recondition on the little engine (think it might have been an 105E Anglia motor fitted with twin throat Webber carb.
It wasn't fast at all but you were so low to the ground that it felt like you were going like the clappers. The sideways exhaust (lakepipe) and the Webber made it sound pretty good. That's all I can remember regarding the mechanics. The brakes were shockingly bad and we never really nailed them properly. The car never had a hard top but came with a clip on black rain cover. For some reason there was a Ford emblem put on the rear boot lid. I never new anything about the history of the car but heard it mentioned that these cars were raced in the 1950's & 60's. After owning it for about 3 years I had a fabulous final drive from Westport (South Island) all the way up to Tauranga in the North. It was the middle of winter and I had the top off. There was snow on the volcanoes through the central north island and I was rugged up in an old fur coat and balaclava. It was a fantastic and beautiful trip. The car stayed in Tauranga with Craig who arranged for its sale on my behalf.
I would love to know what happened to it.
I do so hope it is being loved by someone somewhere.
My dad used to describe it as driving a shoe....
Enjoy and if I can help with any questions I will do my best to try and remember for you.
Kind regards,

I'm hoping to get some more photo's from Judy as soon as she finds them, so will add them to this page when I do.

Looking at these photo's it would appear that there was a lot of bodywork changes made in the 30 odd years before Judy owned the car.

1.  The original hardtop was, I believe, a permanent fixture on the
Cantwell Puma so has had to have been cut off.
2.  The Bonnet has been converted to a forward hinged unit, with the
original bonnet-top opening lid, being replaced with a large air scoop.
3.  The rear end has had the lights and Rego plate area recessed.
4.  All wheel arches have been flared to take the wider wheels.

If anyone remembers making these changes when they owned the car
or
making them for someone else that owned the car
please contact me with the details to help expand the history story.

Hopefully more information and photo's will come to light and I can bring them to this page and
help Judy know more and if the Puma still exists.


I have checked on the New Zealand registration and at the present time the NZ Registration No. DH 1681 is listed as "unassigned to any Vehicle", so the car must, I assume be history or tucked away in someone's garage/barn, unloved and gathering dust, so not so good.


I hope that the present or previous owners might see this webpage on the internet
and would like to contribute further information and photo's
or
if anyone else knows the owner
and see's this page please let him know about it and contact me.