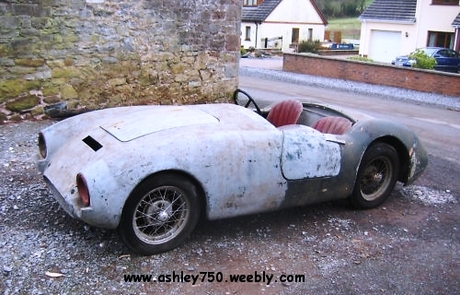 I tried to get the contact details for the new owner but got no reply from the seller, so if the present owner see's this please email me with details of the cars progress.

At the time of the sale the car was located in Ferryside, UK. 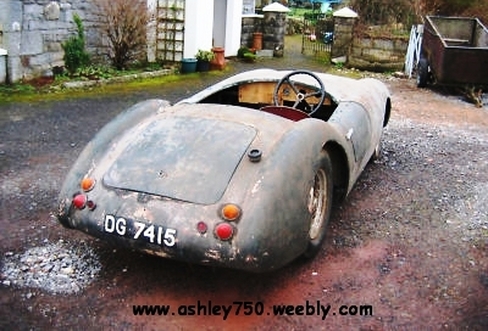 Ashley 750 History
(as shown on eBay when sold)

A 1933 Austin 7 based Ashley 750 Special for restoration, complete with V5 and it's old buff logbook. Car has a rebuilt engine with Cambridge cylinder head, twin carbs, tubular manifold, etc. I have had it turning over and it is showing good oil pressure. The gearbox is four speed with a remote shift. Wheels are 15", it rolls and the handbrake is working!
The chassis has extensions on the front and rear to support the body and allow telescopic shock absorbers to be fitted. The front suspension is the twin spring type, king pins have been renewed and the brake cylinders look new too. 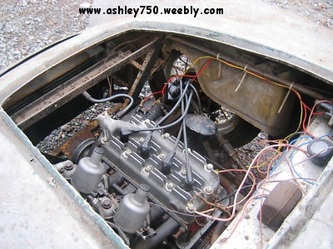 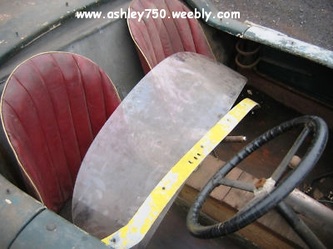 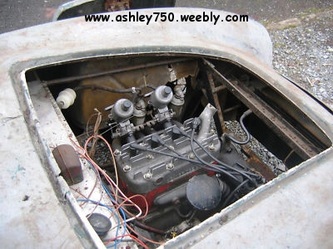 There are two seat backs but no bases, the pretty perspex screen is with the car. Bodyshell will need work, but is not beyond repair.
I have had the engine running, it runs well, although the starter motor is in need of a rebuild! The clutch operates and the car moves under it's own power!
Viewings are most welcome.

DVLA vehicle data (at this time there is none)

However the eBay advert did show some details:

Hopefully at some date in the future the car will be restored and registered with the same registration number, as it was sold complete with V5, it's old buff logbook and known number and cost £3750.00,
a decent amount of cash, too much I would think for it to just disappear.

Well, that was way back in 2012, since then in
﻿N﻿ovember 20﻿13﻿ I received a short message from Philippe, in France via the website contact page:

﻿Hello,
Your web site is great.
I own the Ashley registered DG 7415.
The restoration of the car is nearly complete.
The body is being painted now in Green colour.
I have decided to sell it.
Best regards
Philippe﻿

I relied to Philippe and checked out his Flickr page showing the various stages of the restoration and correcting a couple of date details about the Ashley, it then sort of got filed in the pending box
and it wasn't until now
﻿July 2014﻿  that I rediscovered the Flickr page and emailed Philippe to see if the Restoration was complete as there had been no new photo's added.

The photo's below show the bodyshell restoration,
Starting with it hanging from the rafters as first lifted from the chassis Then the repairs to the damaged body panels and stiffening rods
Striping the fiberglass of old paint and filling with new filler
Before sanding back and respraying with primer coats.

Photo's courtes﻿y of Philippe and﻿ Flickr.com
This next set of photo's shows the restoration works completed on the Motor/gearbox/transmission and axle's and then their assembly into the restored Chassis.


Photo's courtesy of Philippe and Flickr.com
I received a reply to my email from Philippe a few days after sending it, yes he still has the Ashley, its bodyshell has been reunited with the chassis and is awaiting some attention from the spray gun, other commitments have had to take priority, but he hopes to continued later in the year and will keep me updated with his progress.
So keep looking in to see the finished restoration.
Well in October 2016 I heard about
this Ashley 750 again, this time it was For Sale on
www.Carandclassic.co.uk
I tried to contact Philippe Taverne again to see if I could get more details and to ask him to pass on my contact details
to the new owner.
It took a few days for him to reply as follows:
Hello Ivor,
I was away, this is why I am late to reply.
I will deeply answer you this weekend and I will send you next week more detail pictures for your website.
My very best regards
Philippe
​
Unfortunately I never heard anymore from Philippe and I have never
​seen this Ashley 750 again,
maybe it's still hanging from his workshop roof. 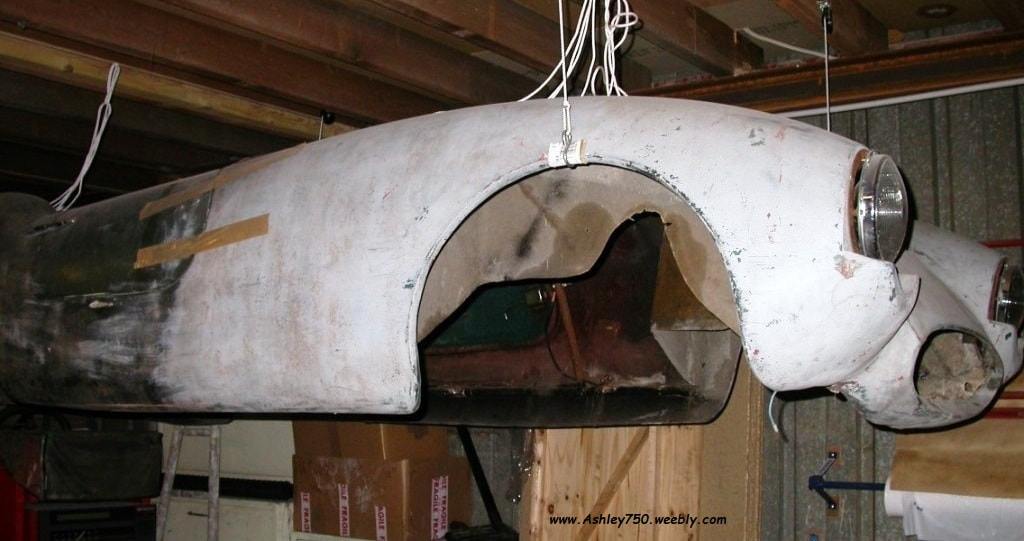