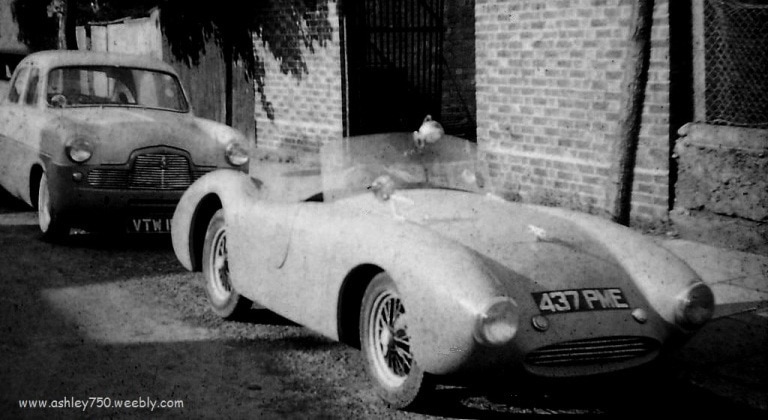 Alan Stevens 1957 Ashley 750
​
These Ashley 750 photo's and details were emailed to me by
Alan Stevens, the owner/builder in
May 2017
﻿
Just browsing the internet and saw your website, recognised the Ashley Logo, bingo!

The car was an Ashley body and hardtop from the
​Robin Hood roundabout garage of the Ashley guys in early 1956.
It was a short wheelbase body for a 1931 Austin 7 and the
guys did the welding and boxed the chassis, etc, after I had
stripped everything off.
By then as a toolmaker apprentice I was past the point of no return.

1957 saw the car lifted over the 6 ft wall behind our house,
strapped to 2 scaffold planks, by the people in the neighbourhood,
who wanted me gone anyway.

The hardtop was too confining so it went, the brakes were non existent so I fitted Bowden hydraulics, great, the seat out of the rear of a Hillman, I think, looked nasty so in went fibreglass buckets
​from I believe Ashley.

She was registered as a "1957 Austin Stevens" in Edmonton,
North London.
My soon to be wife and I drove the car every day for the next 4 years. 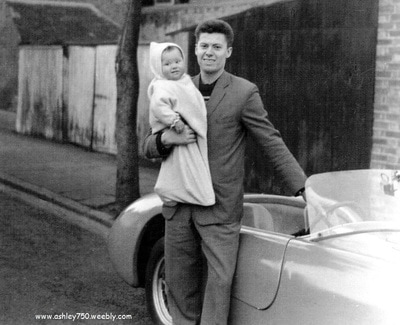 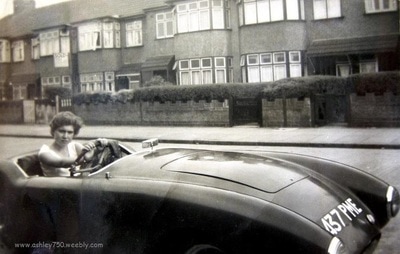 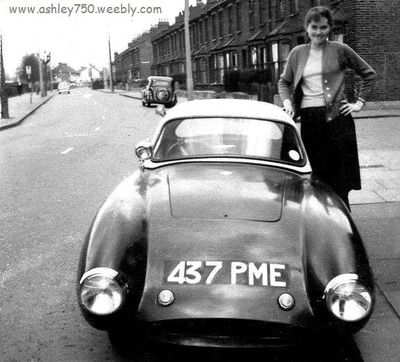 I grudgingly sold my special in late 1961 and bought a new Mini, incidentally from the end of that short, Rays Road, where the car went over the wall in 1957 ***.
​I'm hoping to hear more about the story​ of this Ashley 750 soon,
​well a month later I sent Alan an email asking for anymore details, colour, photo's, etc, and received the following:
​
​Hello Ivor,
The whole website is fabulous and I'm real exited about my little portion in it, sure takes me back nearly 60 years, I'll be 80 at the end of this month but it has not slowed me down much.

​Incidentally in my 1st email to you, the last part of the letter was gone when I looked at what I had sent. It should have said *** "at the end of Rays Rd. Colin Chapman had a shop where he produced the body's for his Lotus eleven, and seen from the railroad track out of Angel Road Station". The special had to go over the wall no gates or openings in number 88 Montague rd.

The car started out unpainted and was running around awhile unregistered, possibly where the date and the 437 PME happened.
The picture on the street in front of the 53 Zephyr, I had just finished painting the bottom half of my old mans car to make it look like a Zodiac, he had let me prep and paint my special...Orange, same as the then current Austin mini van, so that was his price.

At that time I fitted the hyd. brakes and seats, easier to remove the body to do all this stuff paint as well, this if I remember right was maybe late 1958. My girlfriend (wife to be) lived at 88, I actually lived in Chingford, looking back it was probably a bit of a cheek taking over her parents back yard.

By the way L.B. Williams "Austin 7 Specials" that little book got a lot of things sorted out in the end for me, pity he never wrote it a bit sooner. Building the special kind of stayed with me and l have screwed around with many projects since didn't have many photos of the Ashley though, but I'll see if I can find some,
​regards Alan.
​
Alan also sent another photo with his email, not so much of the Ashley but of his new house being built in Swindon.
​Ashley front can just be seen on LHS of photo. 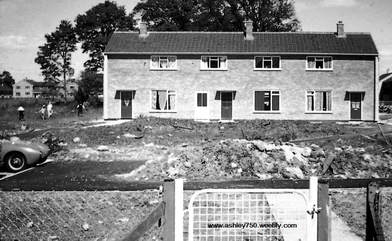 ​Alan also mentioned that he had sprayed the Ashley 750 - Orange, so I took the liberty of painting one of his previous photo's to match.
He commented after seeing it that it was a good match.

So if you have owned or have any other information about this
1957 Ashley 750 sports car
Registration No.
437 PME

(originally registered by Middlesex C.C. in 1957)

please email me at

I would then be able to pass on any new details or photo's to Alan,
​the builder,
via this webpage.