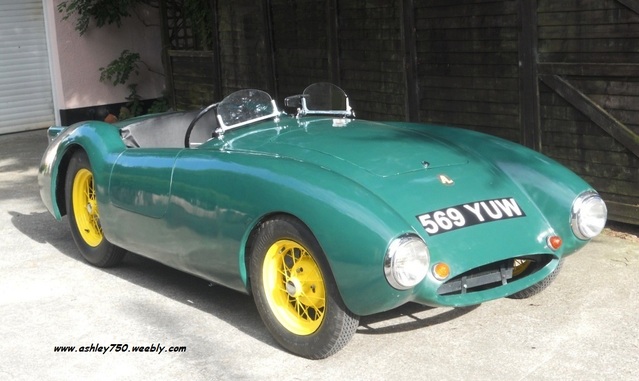 This is another Ashley 750 that I had no record of as existing, it has not shown up before and has not appeared on any of the registration index's that I have seen, hence it didn't appear on mine, until now. 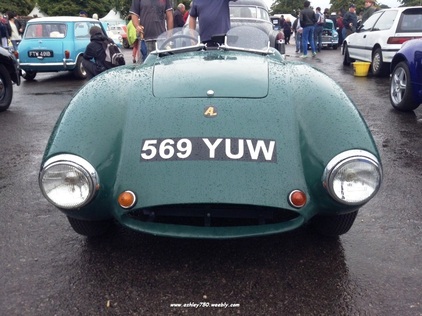 Photo courtesy of Nick
This is the event that attracts over 38,000 visitors to The National Motor Museum.

This year it attracted two separate people, both that are familiar with this website and  ..they spotted this

they both took photo's of it and the next day emailed me.


This is the first photo I received, Nick sent it, also asking if I had any information about it, "No sorry to the 1st", and did I want anymore photo's, "Yes please to the 2nd", although I did dig up the DVLA info and send:

The vehicle details for Austin - 569 YUW are:


Within a couple of days I then received Nick's other photo's, he seems to have been there on a different day as it has been raining on the Ashley just before he took them.

My thanks to Nick and Nigel for thinking of the Ashley Laminates website and sending me the photo's to use on the site, it's these actions that will bring all the Ashley's together for the future.


As I mentioned this Ashley 750 had the For Sale notice out with the owners name and telephone number shown, Nick had taken a photo of the notice and sent it to so I just had to phone it and get to know a bit more of the cars past history.

I chose the wrong time to make the phone as no one was home and I had to leave a message with my website/email details and hope for the best, fortunately Peter checked the website and emailed me the next day with more information and more photo's.

The following details are from peter's email:

Known history of our car:

It was seen driving around South Wales in the late 1960s, registration number JJ 3050.
It was then advertised for sale in 1972, my father went to look at the car hoping to find an Austin 7 sports engine.
The car was stored at the back of a garage, it looked like it hadn't been driven for a few years.
The engine was a standard Austin 7 engine so my father wasn't interested in it.
The car again appears for sale (at a much reduced price) in 1974 and my father buys it for the engine and gearbox. 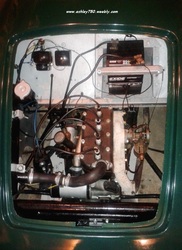 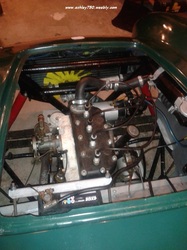 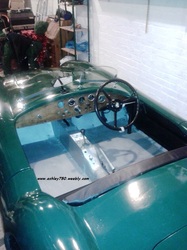 We were soon advised that we had bought an Ashley.
When we found the 1950's article in Motor Sport about Ashley's we concluded that this may have been one of the 'factory made' kits.
It has an Austin 7 chassis that has been 'boxed' and a tubular frame welded on to it (see photo),
Bellamy front suspension, Bowden 'over the top' front brakes, the Ashley 750 lwb body and sheet aluminum panels in the engine bay, cockpit and boot. The only thing really missing was seats (and a working gear change mechanism).
It had allegedly been raced but nothing about the car (engine, tyres, instruments etc) backed this up. 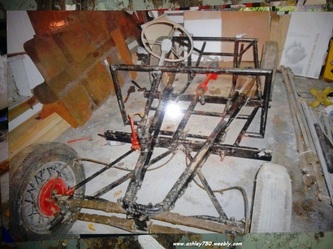 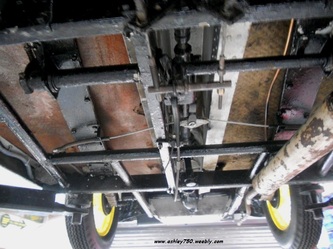 The car then sat at the back of our garage until last year when due to a lack of space we did actually get round to making it road worthy. We didn't really restore it, we just got everything to work and polished it.
The laminate colour is Green (we have had sprayed it Green as the original body did not polish).

Current registration number - 569 YUW     (from August 2013)
Date first Registered - 20/12/1932         (under No. JJ 3050)
The chassis number is 166171
Ashley date - we estimate it at 1957 because the configuration of the rear chassis seems to change between the 1956 and 1957 in the Motor Sport adverts.
Our car has the 1957 configuration but there are weld marks on the chassis where they have removed/changed the position of the tubes from the 1956 locations.
We tried to get it registered as an Ashley but the DVLA wouldn't do it.
It is registered as a 2 seat Austin 7 sports.
Please do not hesitate to ask any further questions.
Regards,
Peter Hales. 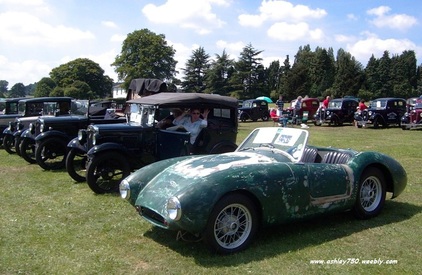 This first one was in the Austin 100th anniversary rally at Croften Park, Longbridge.
​
It was parked in the 1934 line of cars so the chassis is almost certainly a 1934, however he has no other details.


The other two photo's were believed to be taken at the Madog Motor Museum in North Wales and shows a 1937 Austin 7 with Ashley 750 body and GT Hardtop, The museum has now closed down so it could have ended anywhere. 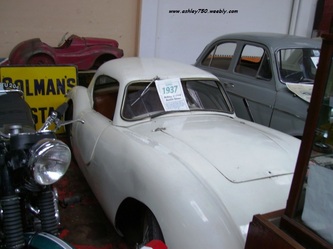 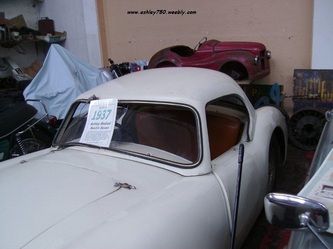 David Offer had seen these photo's on the
Forum: Welcome Austin Seven Friends
and he emailed me a link, and we both thought the same thing,
that this was the same car as shown above.
As you will see from the Forum replies the Museum it was in was the Mouldsworth Museum and that is where the original photo's I had from Peter must have been taken, just a slight mix up on location.
It is unfortunate but the Mouldsworth Museum has also closed now.
​
It was in October 2013  that I had an email from Peter
to tell me that he had sold the Ashley and that it had gone
to a guy in Switzerland.

After that in  March 2014  I had an email from
Markus in Switzerland, he had purchased it and was restoring it
for a customer.
Markus was interested in finding out what equipment would have been installed in the original Ashley 750's back in the late 1950's.
​I explained as best I could as below;
"There were no floors supplied, dashboards or seats, it was just a case of what you had or could get cheaply, like plywood floors cut to the shape required, a plank of wood for a dashboard or sheet of Aluminium (if you could get any) cut and fitted in with f/glass, seats from an old car cut down to fit, all stuff like that.
Remember it was not many years after WWII and things in UK were not very plentiful, so we made do with what we could get, that's why specials came into being as all the steel was going into new cars mainly for the Export market or the UK rich and famous, the home market had to make do with old pre-war cars and then along came f/glass".
Later in September 2014 Markus emailed again to say
that he was in the middle of the rebuild/restoration
​and that he was looking for suppliers of parts and for go-faster
equipment to incorporate in the car.
​I suggested that he was in a better position to get such information
as I had been out of the UK for 50 years and companies I had
dealt with would be long gone.
(see photo's below)
Then in March 2016 I got another couple of photo's of the body repaired and undercoated about to be fitted
​to the restored chassis. 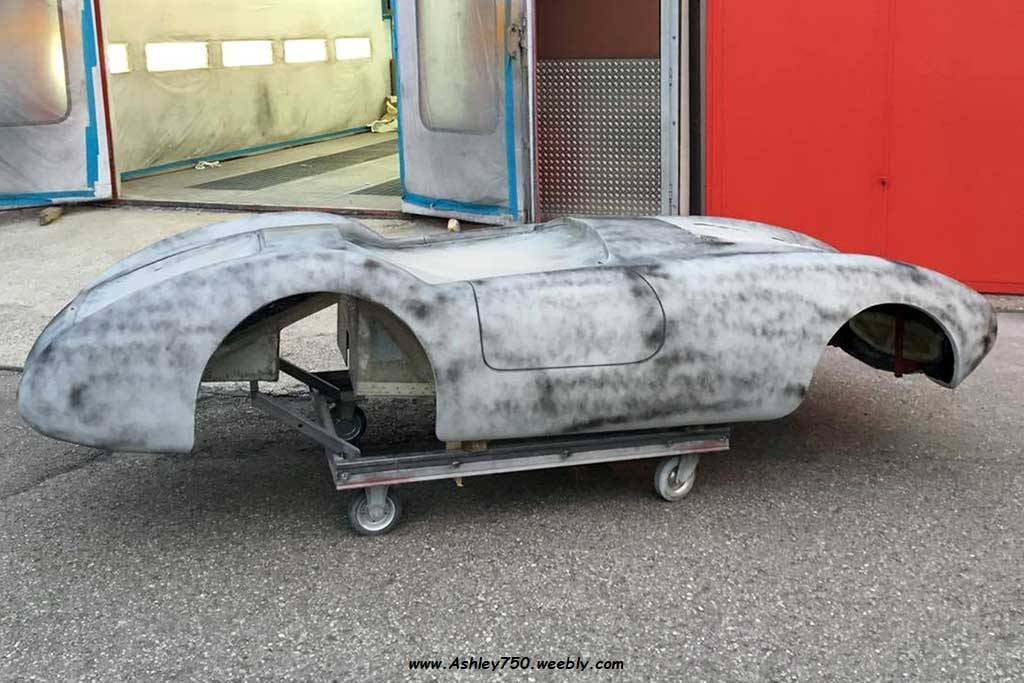 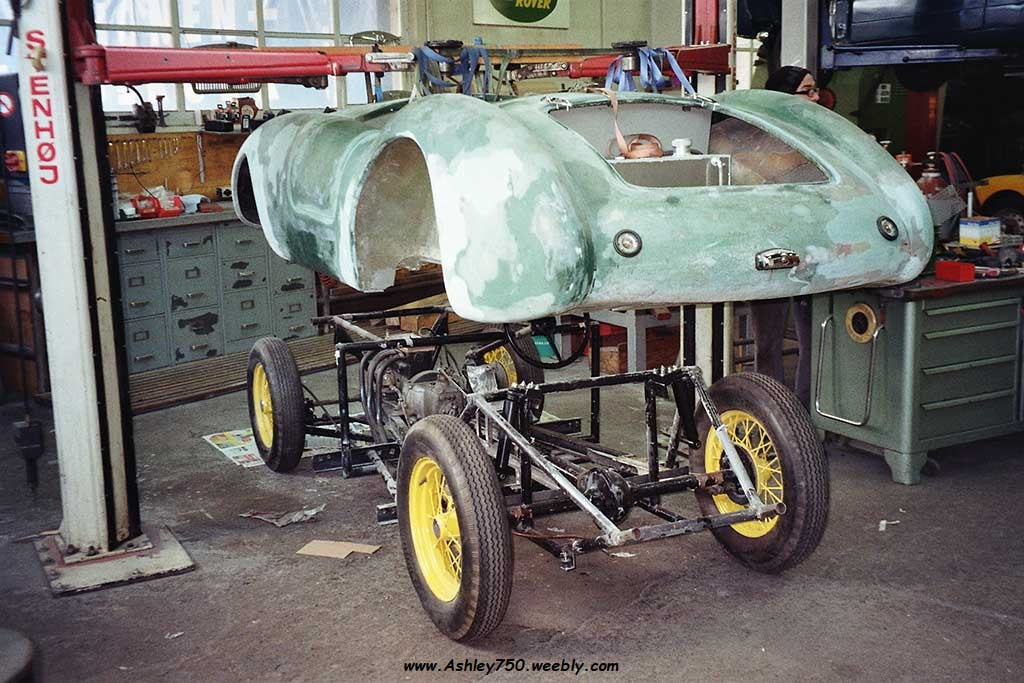 ​Later in the year Markus supplied these following photo's
Markus also supplied a link to his Swiss website where he has
many more photo's of his restoration of this
Ashley 750
just click on the button below to see.

Should the new owner see this page and if he would like to contribute
and send some pictures showing the completed car please use the
contact page or email below.
If anyone has any information from the past about this
Ashley 750 car
Registration No.