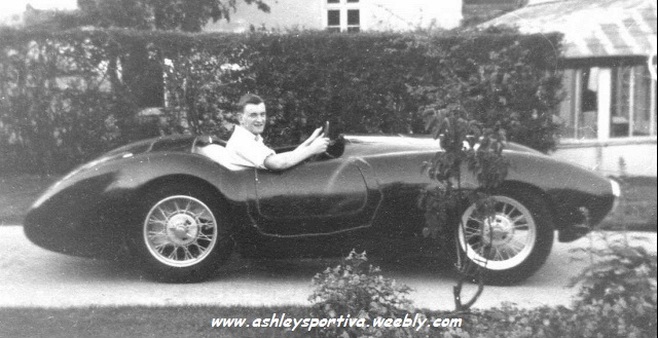 Photo courtesy of Brian Mclacklin owner & builder
This Photo was sent to me by Brain Mclacklin, who had in 1954/55 constructed it from one of the first Ashley 750 bodyshells produced and a 1931 Austin Seven chassis, Brian had seen this website and sent the following email to me.
Brians Email

I have just woken up to the fact that there is an internet site re the above.  I purchased my AL body, I am sure, in late 1954, although most records I now read refers to them starting in 1955.
I was living in Orpington, Kent at that time.
The body arrived on top of an old Daimler Hearse which had a angle iron frame attached to the roof on which the body was bolted!
It looked a bit like the old war time cars that had gas bags on the roof, & raised a few laughs from the neighbours.
The body had a 6'-3" wheel base as my 750cc engine was a 1931 & the chassis a 1929.  A picture is attached.

I never got round to registering it & I don't know what the youngsters did with it.

I replied and asked for more details and permission to publish to which I received this next email.

Just to answer your queries first.  Please feel free to use my name & photo etc.  I am afraid I haven't got any other pictures or paperwork of the car.  I only had a Brownie box camera with black & white film in those days.
My Ashley body was self coloured British Racing Green which Dad paid for.
I got the wheels rebuilt, using the old hubs.  I had the engine rebored & the bearings re white metalled etc. The valve seats were re machined to restore the correct seat width.  Everything else was stripped & re conditioned by me.  I can't remember now how I lowered the front axle beam but know I did & then I had to modify the radius rods that connected from the axle to the ball joint on the chassis cross member.  I stuck with cable brakes but designed & got made up inner & outer Bowden cables complete with grease nipples & connected them to longer brake levers.  I had found out that the 1937 Austin Ruby ones were 1 7/8" centres compared to my 1 3/8" .  I had of course to fit a cross flow radiator & pump which was from a Ford.  I was always digging around in the Breakers Yards.  I extended the chassis side members over the rear of the axle & fitted telescopic Shocks at 45 degrees, to try to reduce the steering effect that the quarter elliptic springs gave.  The steering wheel was from a Morris Minor. And so on it went!
By this time I had purchased an old 1937 Austin 10 for work, then girls, parties, exams, etc. were all getting in the way.
So having got my project to that stage it had to go.
Well, I think that's about it for now, 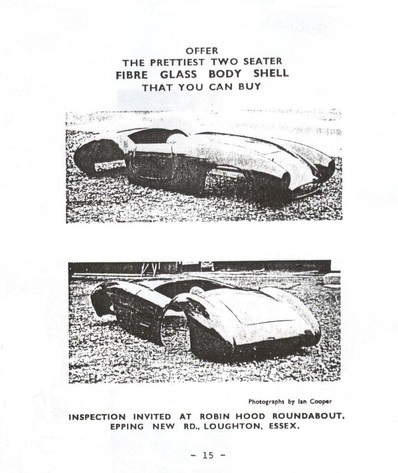 Photo of early Ashley Advert courtesy of the Internet.
Ashley Advert for 750 Model, this would be similar to the bodyshell that Brian used.

As its name implies, this was intended to fit pre-war Austin 7’s which had a 750cc engine. It was initially built in two sizes to fit 6 ft 3in and 6ft 9in wheelbase chassis and cost £78.

This car was sold to a group of youngsters from the 750 Club, were you one of them or did you know them, did you live in the Orpington, Kent area and know someone that owned the car, if so please email me so that we can continue the story and hopefully find out if it was ever registered and if it maybe still survives.

If you have any information about this
Ashley 750 car
without a Registration Number.